Little Egypt who came to the Chicago World’s Fair in 1893, spawned a number of imitators with her “oriental” style of dance. Not unlike many of the early modern dancers who looked to the orient for inspiration, one off-shoot of these vast imitators were the hoochie-koochie shows traveling across the United States from the early twentieth century into the early 1980’s. I posit that from it’s beginning these performances should also be linked to the burgeoning artistic field of dance which, as of yet, had no name. Looking back at the hoochie koochie shows, we might employ our sexist, orientalist, and post-colonialist readings fixed to the male gaze, gender and racial inequality, exoticism, and sexual objectification. However, Caen Amour, perhaps a cheezy title for one of these shows not unlike “Ripe on The Riviera”, or “Love Shack,” takes place in the historical imagination. Here in this personal rendering of a hoochie-koochie show--- most of the historical sexism and other –ism’s remain in place --- to imagine as close as possible to what it might have been. Between the now and then, in the imagination; we welcome you to join us…

Looking through our historical lens we cannot overlook discriminatory practices, as well as social and public policies; here in front of the many daddies, casanovas, marlboro men, peeping toms, pimps, pip squeaks, sharks, playboys, thugs, salamis, and whistlers, we might also find some agency in imagining minimal yet probable possibilities and forms of creative resistance between the cracks of history. At a time when the boundaries between expressionist dancing, erotic dancing, social dancing, religious dancing, folk dancing, and entertainment dancing were yet to be fully carved out making a way for a canonical field of artistic dancing; what kind of liminal experiments could we imagine taking place amongst the women who were dancing and making dance (or as we like to say “shaking and baking it”) in these contexts? Perhaps these artists were well aware of plural modernisms, Spanish dancer La Argentina, Gaugain, naked versus nude, zen, free jazz, hula, questioning primitivism, and the seeds of third wave feminism yet to come at the end of the century. Who knows? Yet, I imagine that what was to later become known as modern dance surely had some of it’s beginnings here too, in the so-called cleavage as well as booty and vagina cracks, where the history is almost completely unrecorded and where herstory --- knowing where feminisms and femininity were well up for debate --- and in the here and now performing that debate (via what writer Alice Walker calls) in search of our mother’s gardens.

Thereby, the work transforms the theatrical audience into the awareness of the gallery viewer’s position to further complexify their own criticality to an imagined past and how each of us fills in the blanks from various political and social awarenesses. Here, a woman re-constructs the limitations of the object of desire in the hoochie koochie while simultaneously trying to experiment with the notion of “woman- native-other.” Here, men, perform as female figures, with the affect of clothing. Real differences between the performance of genders remains leaving a space of reflection on difference: between what we imagine and who they perform; as well as between what we imagine and how we perform as audience. This work for four performers takes place on both sides of a décor/installation/architectural object allowing for multiple viewing perspectives throughout the show. Inspired also by the writing of post-colonial feminist writer and filmmaker Trinh T. Minh-Ha, Caen Amour and the untold history it explores hooks on to one of her quotes: “The story depends upon every one of us to come into being. It needs us all, needs our remembering, understanding, and creating what we have heard together to keep on coming into being.” 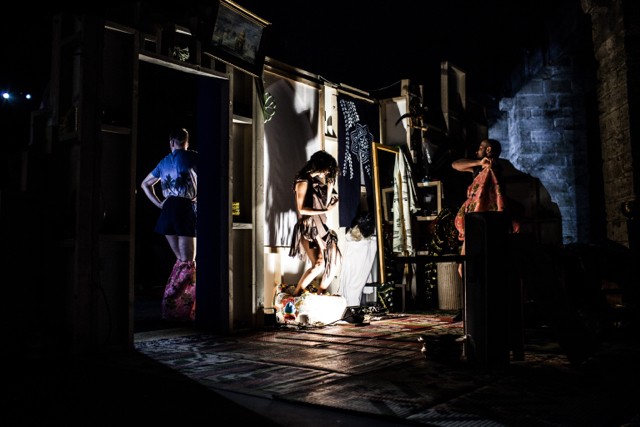