Twenty Looks or Paris is Burning at The Judson Church takes a new critical position on postmodern dance aesthetics emanating from the Judson Church period. By developing his own work as an imaginary meeting between the aesthetics of Judson and those of a parallel historical tradition, that of Voguing, Trajal Harrell re-writes the minimalism and neutrality of postmodern dance with a new set of signs.

"What would have happened in 1963 if someone from the voguing ball scene in Harlem had come downtown to perform alongside the early postmoderns at Judson Church?" is the central question in this new piece by the choreographer. Twenty Looks or Paris is Burning ... comes in five sizes, from extra small (XS) to extra large (XL). Rather than illustrating a historical fiction, these new works transplant this proposition into a contemporary context. What we experience was neither possible at The Balls nor at Judson. In the construction of an imagined audience --- that of a 1963 Judson Church Dance Theater audience --- in the minds of a real audience in 2009, OR put in another way, in the distance between who we imagine a work is being performed for and its actual performance for those present, what kind of new relations can be created, adapted, and reassigned between performer(s) and audience? A thing of rare beauty, the (XS) is a twenty-five minute solo danced primarily in the dark by the choreographer and made for a maximum audience of twenty-five seated on the floor of the theater stage, gallery floor, or in the corner of the room. 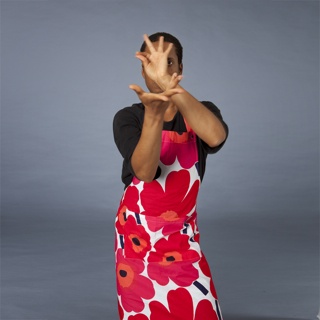