(M)imosa, a choreographic collaboration between Cecilia Bengolea, Francois Chaignaud, Marlene Freitas, and Trajal Harrell, is the title given to the Medium version of Harrell's series in five sizes, (XS) - (XL), entitled Twenty Looks or Paris is Burning at The Judson Church. The propositional departure for the series- "What would have happened in 1963, if someone from the voguing ball scene had come down to Judson Church in Greenwich Village to perform alongside the early postmoderns?"- is reconfigured by (M)imosa into a encounter between these four artistic voices.

The Voguing dance tradition refers to the competitive balls staged in Harlem dance halls beginning in the 1960's. A form of social performance practiced primarily by African-American and Latino gays, transvestites, and transsexuals, voguing imitates archetypal social and gender identities through fashion, movement, and behavior. At the same historical moment, in the 1960’s, the pioneers of the postmodern dance broke with the traditional representations of classical and modern dance and sought to make dance without artifice, based in authenticity.

Inspired by Paris is Burning, the seminal documentary film about voguing; their personal research on voguing; and their collective experience as makers, the four collaborators in (M)imosa dare to own and share the immediate distance between themselves, between them and their inspiration, between what they portend and what they perform, and between their counteracts. Choreographed and Performed by Cecilia Bengolea, Francois Chaignaud, Marlene Monteiro Freitas, and Trajal Harrell Lighting Design by Yannick Foussier Production Assistance by Michael Hart 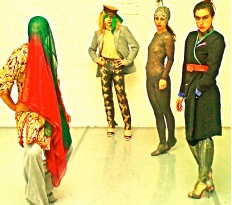